If you’re growing indoors or using a grow tent, then you already know you need high-quality LED light systems to make it work. The LED grow light industry is booming, and one of our favorites is the Viparspectra LED grow light system.

The LEDs are known for incredibly large yields and can be adjusted to increase plant growth and potency. All of this, and at lower energy costs. If you’re aiming to increase yields from your plants while keeping them happy and healthy, LED lights are the way to go. However, many manufacturers make claims they don’t live up to, and the consumer is left with inadequate products.

Viparspectra and the Viparspectra reflector series are well known throughout the growing community. But, this is a Chinese product which many questions and avoid because it’s not American made. That’s not fair, as these plant grow lights are of decent quality and reasonable price. Here is our LED grow light review of the Viparspectra Reflector design series.

Technically Viparspectra is an LED light best seller among growers everywhere. Viparspectra brand, but the company is Shenzhen Bailuo Technology. They work out of China and manufacture LED lights that last for years. This company does well in pricing because they remove the middleman.

Instead of heading to a distributors website, they sell their products directly to the consumer. Now, LEDs are becoming less expensive, but Shenzhen Bailuo Technology can stay a step ahead with this advantage. They are available on Amazon at no markup, but other than that you won’t find them at a standard retailer.

Overall this company aims to sit comfortably between the top-quality competition and reasonable prices. They keep a focus on using only necessary features and finding the best-LED bulbs.

Viparspectra reflector series uses only Bridgelux and Epileds in their light systems. These are well-known LEDs, and their reputation is outstanding. Quality chips and diodes are the recipes that these 2 companies use in designing their LED bulbs.

Viparspectra reflector series offers a light spectrum that includes infrared as well as 3000K, 7500K. These lights also include 440nm – 730nm. These spectrums are necessary for your plants to grow and thrive while mimicking natural sunlight. You can use the same lights throughout their lifecycle which is a great benefit and saves you money. 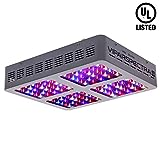 The best feature found in any Viparspectra reflector-series 600w is the bloom and veg switches. During the plant’s vegetative state, blue light is best. However, during the bloom phase most professional growers switch to a higher red frequency.

Although there’s nothing to back up the theory currently, many professional growers are reporting higher yield and better potency when increasing the amount of red light during the bloom phase. Each light also works well with most hangers, hanging kits and daisy chains so that you can suspend your lights over your plants for better light distribution.

The reflector series uses a series of reflectors built surrounding each LED to cascade as much light as possible down into your plants, even more so than HPS lights. Penetrating the canopy with the direct light, you have a higher Lumen and PAR output, larger coverage area and more intensity. It also provides high flowering coverage and vegetative coverage during all growth stages.

The most popular models in the Viparspectra reflector series are the 600-watt and 450-watt options. However, larger growers or professionals prefer to use a few of the 600-watt series. They typically run cooler and last longer than the larger 900 or 1200-watt models.

All of the Viparspectra reflector series are full spectrum LED lights that come with the veg and bloom switches. They all come with power cords as well as aluminum cooling heat sinks, and 4.72-inch cooling fans to keep temperatures low and improved heat dissipation. There is also a Viparspectra dimmable series that comes with even more flexibility to the strength of your light settings. Be careful in hydroponics growth though because the quiet fans can stir up a lot of the moisture in the room increasing the overall humidity.

The Viparspectra warranty comes with all the Viparspectra reflector series options. It’s a simple 3-year warranty that starts counting down from the day you make your purchase. It doesn’t cover any water damage, power surges, issues from hanging, dust build-up, or improper use.

Choosing the Best from the Viparspectra reflector series

We stated earlier that professional growers prefer to have multiple Viparspectra reflector 600 series instead of the higher wattage 900 or 1200. Putting the model’s side by side, we see that the PAR values significantly, as does their size. Dimensions aren’t the only deciding factor.

Many times, multiple units of a smaller full spectrum light can deliver more consistent lighting than a single larger unit. The best value when we see these units side by side is theViparspectra reflector series 600. Because the PAR is among the highest, and the dimensions are reasonable. There is a double the LED bulbs in the 600 compared to the 300, but the dimensions aren’t doubled. The offset ratio means more LEDs per square inch.

This site uses Akismet to reduce spam. Learn how your comment data is processed.